Curious color spectacle in the state capital of Kiel: The small Kiel is bright green after a pipe burst on January 9th, 2022.

On Sunday morning there was a major rupture of a central district heating pipe on Holtenauer Strasse near Dreiecksplatz in downtown Kiel. At times, several thousand households in the north and west of Kiel were affected by the burst pipe and had no hot water for a few hours. The heaters also stayed cold. But just a few hours later, Stadtwerke Kiel was able to restore the supply of most households to the district heating network.

Because the public utilities had added green dye to the water in the district heating network a few weeks before the pipe burst in order to detect damage and leaks in the district heating network in the city of Kiel, a lot of green-colored water escaped in the area concerned around the pipe burst. And it was precisely this water, colored with green dyes, that also caused the green coloration of the surrounding waters, including a green coloration in Kleiner Kiel. 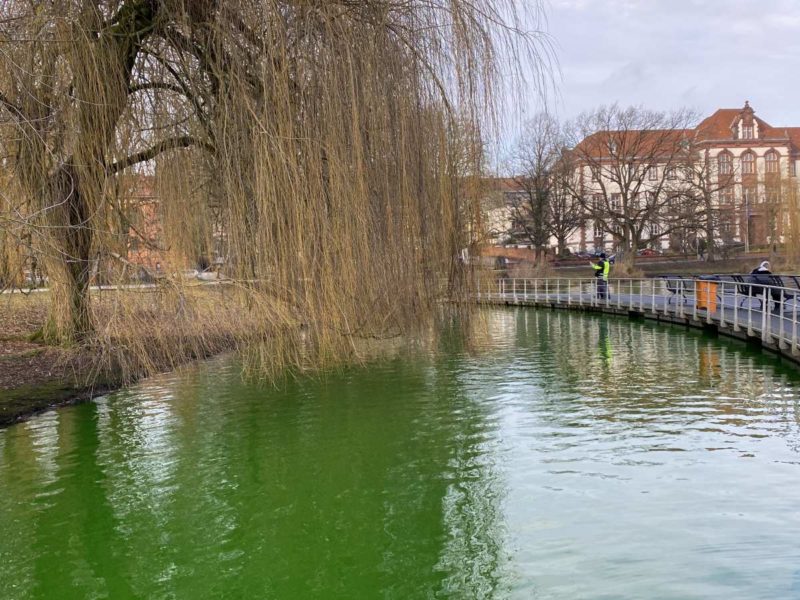 Green water in Kleiner Kiel is safe for people and nature

According to the Kiel public utility, the green water is completely harmless, non-toxic and harmless. That’s why there were green puddles on Holtenauer Straße and Dreiecksplatz on Sunday. And on Tuesday, two days after the pipe burst, the Kleiner Kiel lake was still bright green because of the dye. Over time, however, the color of the water in Kleiner Kiel will return to normal. So the body of water will soon change from green to blue again.