Sommertheater Kiel: Live transmission of the opera premiere “Carmen” on August 19, 2022 at 11 locations

Home/Events, General/Sommertheater Kiel: Live transmission of the opera premiere “Carmen” on August 19, 2022 at 11 locations
Previous Next

Sommertheater Kiel: Live transmission of the opera premiere “Carmen” on August 19, 2022 at 11 locations

Sommertheater Kiel: Live transmission of the opera premiere “Carmen” on August 19th, 2022 at 11 locations in Kiel as well as in Neumünster and Preetz on Friday evening, partly with a preliminary program at the respective transmission locations.

In 2022 the Summer Theater Kiel will take place again on the Rathausplatz. This year it is the summer opera Carmen, which will be performed on the Kiel City Hall Square for a total of 12 days. Carmen is an opera in French with German subtitles. The performance starts at 8 p.m. and lasts about three hours including breaks.

The premiere of the opera Carmen will be broadcast live on August 19 at a total of 11 locations in and around Kiel. The live transmission will also start at 8 p.m., although there will also be a pre-program at most of the live transmission locations. You should therefore be there in good time to get one of the seats provided. Alternatively, you can of course bring your own (camping) chair and make yourself comfortable in front of the big screen. 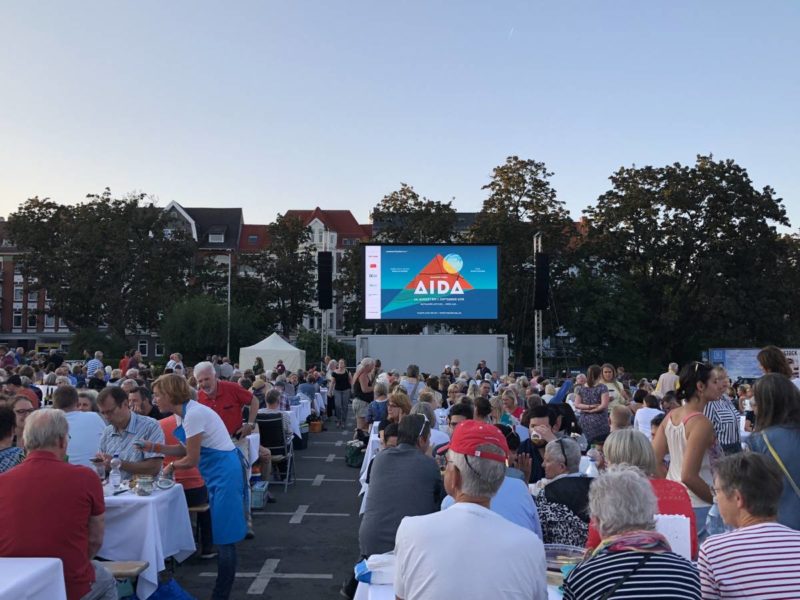 Live broadcast of the opera “AIDA” by Verdi on Blücherplatz in Kiel on August 24th, 2019

All 11 live broadcast locations are free and outdoors.

Registration/reservation is not required. If you want, you can also take something delicious to eat or drink with you, after all, the live broadcast of the opera Carmen lasts around three hours plus the pre-program. There will also be stalls selling a variety of drinks and food.

About the opera Carmen

Carmen is an opera in four acts by Georges Bizet. The libretto was written by Henri Meilhac and Ludovic Halévy based on Prosper Mérimée’s novel of the same name. Although formally an opéra-comique and designated as such, Carmen was “a revolutionary break” with this opera genre. The realistic depiction of milieu, drama and fateful tragedy made it a forerunner of verismo. The first performance on March 3, 1875 in the Opéra-Comique was received rather negatively. Soon after, however, Carmen became one of the greatest worldwide successes in operatic history, although the composer did not live to see it. Even today, Carmen is one of the most popular and most frequently performed works in the operatic repertoire.