Winter in the state capital Kiel with winter storm Tristan 2021: Out and about on Falckensteiner Strand & Schilksee Olympic Center in an icy wind.

The storm “Tristan” brought northern Germany a good deal of storm, snow and ice at the beginning of February. A very cold easterly wind was also felt in Kiel. However, there was almost no snow, there was more than enough a little further south, for example in Lower Saxony. In addition to the strong easterly wind, there was still some high water in the fjord with sometimes strong waves up to the inner fjord. Even if the perceived temperatures were well below the actual temperatures: Such a winter storm invites you to take a walk on the beach, for example on Falckenstein Brach. And so it was on Sunday from the warm couch to the Kiel Fjord. The first destination was the Falckenstein beach. And because the wind hadn’t blown me through there enough, I drove to the Schilksee Olympic Center again afterwards. Luckily, because there was also a rare sight with all the high waves at the stone pier.

Who would have thought it, but there were numerous walkers on Falckenstein beach. It was already quite windy in the center of Kiel, but understandably the wind was much stronger here on the beach on the Kiel Fjord. And the Kiel Fjord had a swell that one is otherwise more used to from the North Sea. In addition, there are now and then very strong gusts of wind, mixed with the fine sand. 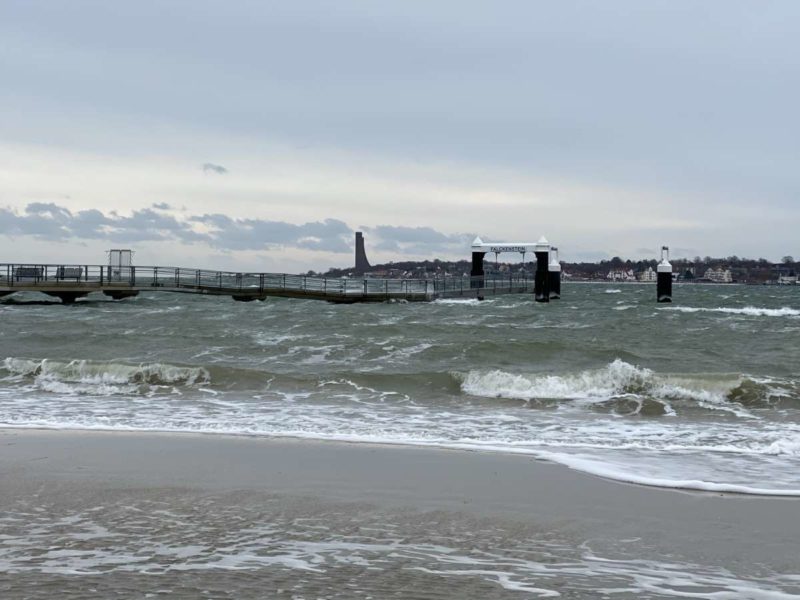 Storm Tristan in Schilksee at the Olympic Center and bathing beach

After a while at Falckensteiner Strand it was time to warm up in the car. The right hand in particular was slightly hypothermic. Because the iPhone is not really easy to use with my gloves. But should that have been it? And so it went on to Schilksee. And there the waves were even higher than in Falckenstein. It’s also somehow logical, after all, Schilksee is a little further north and therefore closer to the Baltic Sea.

Only a very narrow area was left of the Schilksee bathing beach. Everything else was water. And the stone pier on the beach? Yes, of course she was still there. But hardly recognizable. 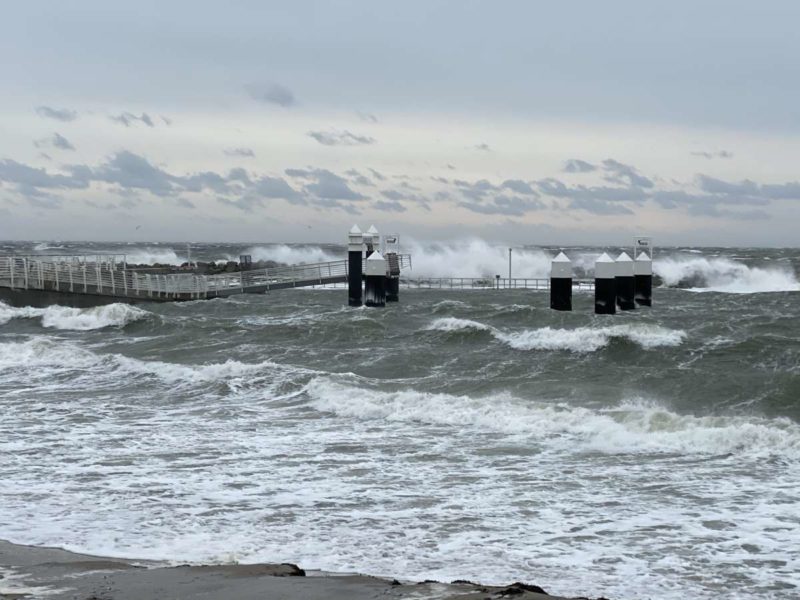 Huge waves and icicles at the Schilksee pier

Here in Schilksee, too, numerous walkers were out and about at the Olympic Center. After all, you don’t have a sight like this with high waves, high water and icicles on the railing of the landing stage every winter. And, of course, only very few came to Schilksee during the storm just to enjoy the fresh sea air. The weather with storm Tristan had offered a lot of great photo opportunities. Almost everyone who was out and about here at the Schilksee Olympic Center on Sunday afternoon diligently took photos with their smartphone or camera.