Hello 2020! On New Year’s Eve 2019/2020, the New Year was also welcomed in Kiel with plenty of rockets, batteries and firecrackers.

And another year has passed. And like every year, many people went out onto the streets of Kiel at midnight to welcome the new year with fireworks in Kiel. Or, of course, to watch the spectacle.

As here on Holtenauer Strasse, it was mainly the batteries that provided fireworks that lasted several minutes on the ground and in the air. Unfortunately, the fire brigade and rescue services also had a turbulent night with numerous operations on New Year’s Eve 2019. These include fires, burning dumpsters and injuries caused by firecrackers. 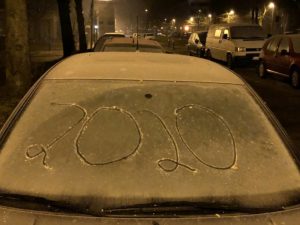 Around midnight the weather conditions were good. No rain and just above zero degrees. Similar to last year’s New Year’s Eve, just a little bit colder. A little later in the night there was frost in places and slippery roads.